The first time I set off on a road trip with kids, we all loaded up in my popup camper and hit the road for a week of wandering down the coast. I had traveled with four adults in the camper before, how much different could four kids be? I mean, they’re just smaller, more compact people. Right?

Man, was I wrong.

We were less than three hours in before the first territorial battle began, and those kids were ruthless! After some poorly rationalized arguments, a whole lot of yelling between brothers, and some very deep breathing on my part, I finally declared that I would be the one to pick where everyone slept and the next one to make a noise was going to be camping out in the backseat of the car.

Harsh? Maybe. But the rest of the trip was peaceful and no one suffered through sleeping on some seatbelts.

And when we returned home a week later, I started looking for a camping solution. The first time I stepped into a bunkhouse travel trailer, I knew this was the answer.

Separate beds? Privacy? Flush toilets? Bunkhouses, where were you my whole life? 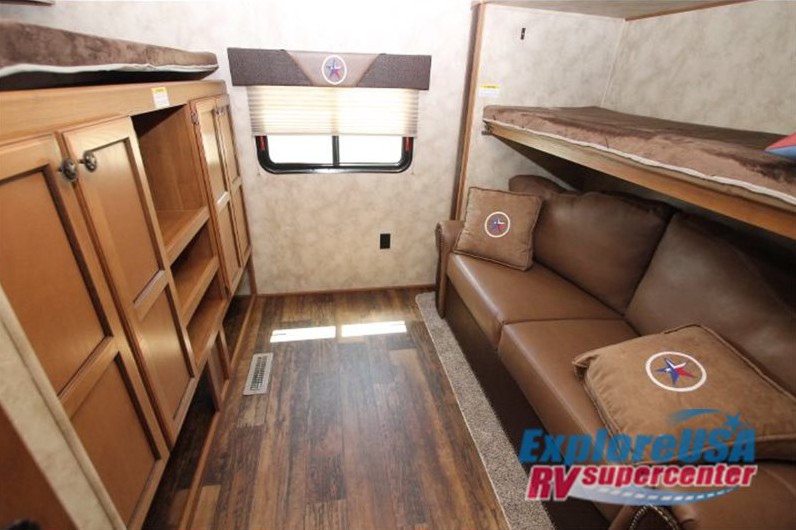 So if you’re anything like me and you’ve got a whole brood of kids tagging along on your RV trips, then a bunkhouse is definitely for you. And the time to buy one is now, at our Bunkhouse Blowout Sale! Right now, we’re offering the lowest prices of the year on some of our best models of bunkhouse trailers, like the CrossRoads RV Hill Country. With a spacious living room, upgraded kitchen, and a bunkhouse that’s been outfitted with its own entertainment center, this is the travel trailer that makes sibling rivalry (almost) obsolete.

Visit one of our eight locations today to see for yourself how a bunkhouse trailer will work for your family’s travels. And take it from me, happy kids = happy travels.